The article The Call to Adventure: A Crucial Hero’s Journey Step in the Beginning of a Story showed first on The Write Practice.

Every great story begins with a “bang!” That bang must be the Call to Adventure, or Inciting Incident, that initiations your hero’s first major choice. 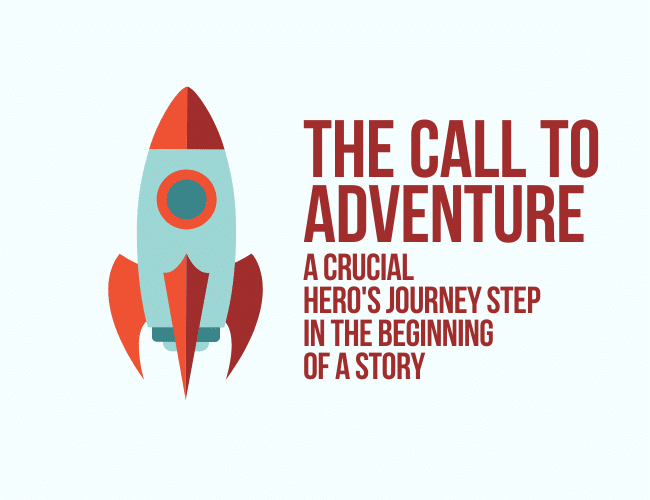 The Inciting Incident is a crucial moment to program and write in your story. It was the only time the reader gets to witness your hero’s values in action. In other words, it’s your first chance to establish your story’s core value by showing the reader what the hero is willing to suffer and sacrifice for it.

But not right away. Because after the bellow, there must be a refusal of the call. Why in the world would should your hero refuse their call to adventure?

How to Start The Hero’s Journey

At this point, you’ve established your story’s Ordinary World. This is where you clue the reader in on the day-to-day routines of your hero’s life. It’s probably boring, mundane stuff. Nonetheless, it’s stuff that stands for something, like live, safety, franknes, purity, and so on.

Once this groundwork is laid, it’s time to introduce a little chaos. That’s the Call to Adventure.

This classic tale opening is in relation to us courtesy of Joseph Campbell, a prof of mythology, who examined hundreds of myths in his volume The Hero With a Thousand Faces. Later adapted into a” 12 stages of the hero” example by Christopher Vogler, this mythic structure works for practically any story with any story kind. It is a wild card for anyone on the writer’s journey who is trying to create a bestseller that readers love.

That being said, the Hero’s Journey isn’t just a powerful formula for storytelling. It’s a study of the human heart. The only reason Joseph Campbell detected this “monomyth” is because he noticed structures across all great narratives. It seems, he noticed, that all humans long for the same story.

The Inciting Incident were crucial piece of that story. Academically, the Inciting Incident is easy to describe: It’s specific actions or vary that gets your story running. It’s usually a few moments of sudden conflict. In movies, it’s often an act scene.

But the conflict is only half of it. What this description altogether misses is the second half of the Inciting Incident, which is its own necessary step of the Hero’s Journey. It is the humanizing step, stimulating even the most monumental heroes relatable to simple readers like us.

Pace 2 and 3: The Call to Adventure, and Refusal of the Call

The Call to Adventure pass early in the tale when the hero shall be notified of a hazard or need facing the community. The hero may be specifically asked to take up the tour, or may respond to an existing situation.

The Refusal of the Call happens almost immediately afterward as the hero recognise the immense danger of what lies ahead. This “refusal” can take several figures, including fear, despair, attempting to flee, or foolish alternatives that result in a botched start to the journey.

Let’s explore each of these steps in a little more detail, and then learn how you can easily begin planning each step in your own hero journey.

The Call to Adventure

Several weeks ago we explored the beginning of every great story, Step# 1: An Ordinary World with an ordinary, relatable persona( who will become the hero ).

To begin your hero’s narrative, something needs to push them out of her convenience zone. This sudden move is known as the Inciting Incident. Conflict comes from within, or without, and upsets the status quo.

An example of “from within” would be The Hunger Games. Katniss’s world-wide of District 12 is waiting for the “Reaping,” when participants in the Hunger Games will be chosen. Her moment comes when the injustice of her own world becomes horribly personal.

An example of” from without” would be Star Wars. Luke Skywalker begins his adventure as a lowly farmhand, helping his uncle prepare some new droids for the upcoming harvest. Then a squad of stormtroopers murder his uncle and aunt, forcing him to make a life-altering choice.

“ The Call to Adventure is the Inciting Incident for your narrative. Consider a “wrong” that will throw your protagonist’s world off course, then shed it at them. Tweet thisTweet Example: Lord of the Rings

The threat can also be two-sided( and often is ). In The Lord of the Rings, the dangers of the Ring rises from inside, as the ancient weapon cries out to its villainy master, summoning the dreaded Nazgul to invade the Shire.

In Pixar’s Toy Story, the external change comes in the form of Buzz Lightyear, a new plaything that ousts Woody as the favorite plaything. Buzz is not the foe or Shadow, however; Woody is his own nemesis, at least until the film’s later panoramas. He is his own worst adversary, an insecure and jealous president who must learn how to share the heart of his “kid.”

Dreaming up your Inciting Incident may appear complicated, but it can easily be as simple as asking,” What’s wrong with the world I’m building ?” Then fling that “wrong” in your hero’s face. Make them feel the brunt of it.

This, in the Hero’s Journey, is Step# 2: The Call to Adventure.

No matter where your conflict comes from, it needs to demand action from your hero. They need to be put on the spot, having come face-to-face with some version of the world’s ultimate evil.

And here’s the thing.

Your hero cannot simply say’ Yes’ and answer the call.

Your hero needs to fail.

Step# 3: Refusal of the Call

A common mistake of amateur columnists to generate heroes who are too strong. These writers think up ” influences” and “abilities” and other features to stimulate the specific characteristics “cool.”

But ” cool ” isn’t interesting. Conflict is.

“A story–or a character–isn’t interesting without conflict. And conflict expects weakness.Tweet thisTweet

No matter what kind of plot type you are writing, it is imperative that your hero miscarries earlier today in your storyline. They must face challenges they can’t overcome on their own. Why? Because they’re human( or not immediately heroic) just like you and me.

When your hero is experimented for the very first time, they can’t extends with flying colors. They need to blow it, screw up, or chicken out. They can’t get it right yet. Otherwise the story won’t resonate with your reader’s soul. Readers know that being a hero is hard, and no one can simply do it from the get-go

Sometimes the failing is small, or internal.

In The Hunger Games, Katniss Everdeen doesn’t take back her entry into the Hunger Games, but she despairs, bidding her family farewell under the assumption that she will certainly die.

And while in Star Wars Luke doesn’t skip out on becoming a Jedi and joining the Rebellion, he regularly complained of how hard it is to learn the ways of The Force, even walking out on Yoda in the second film of the triology.

The Refusal of the Call must expose your hero’s weakness. This weakness should take two shapes 😛 TAGEND

First, your hero’s physical ability to complete the undertaking must be in doubt. Perhaps they’re not the strongest, the prettiest, or the most agile. Something about their physical strength required to make the reader wonder.

This psychology is as old as human history. All cultures has its David vs. Goliath archetype because the story resonates in our hearts. There’s something in our spirits that knows that while it’s a trope, it remains capital-t True.

Secondly, the Refusal must disclose your hero’s emotional fragility. They can’t” have it together” — at least not underneath. They may maintain a bold exterior, but the reader must be able to see this for what it is: a mask.

Because this, too, is psychologically true-life. Whenever we must face a brand-new challenge — a new job, wedlock, parenting, conflict at home, striving weight loss, attempting something great — we always face a crisis of belief. Even the most confident, self-assured person in the world conflicts with confidence sometimes.

Example: Lord of the Rings

In The Lord of the Rings, Frodo is nothing more than a simple hobbit, hoping to live out his days in peace and mild adventure within the Shire. Yet when he learns that the Ring of Power is in his belonging, and that it was necessary carried all the way to Mount Doom and destroyed, he is overcome with despair.

He does all he can to give it away to his mentor, Gandalf, who must refuse the temptation due to the Ring’s danger. In this moment of great vulnerability, we all can empathize with Frodo’s fear and unwillingness to face challenges so seemingly impossible.

And eventually we return to Toy Story, as Woody must choose how to handle the unwelcome arrival of Buzz Lightyear. He could share, a difficult challenge even for many adults who are still learning how to play nice with others.

Yet he withers under the temptation to get Buzz out of the picture, and does so with a cruel trick. This selection to Refuse the Call to work with Buzz, rather than against him, leads to their expulsion from Andy’s room into the dangerous, new world outside the house.

It is this step of the Hero’s Journey that brings your story and its attributes to vibrant, painful live. We’ve all feel called to something greater than ourselves, and we’ve all failed at such a call.

Sometimes it’s the physical challenges set before us, like hard work, early mornings, late hours, and self-denial that is just too difficult. Other occasions it’s the emotional obstructions, like hard speeches, reliving painful traumas, or summoning the will to forgive that turn us back before the pilgrimage can even begin.

The Refusal of the Call step of the Hero’s Journey is absolutely crucial because it is absolutely human. Don’t miss out on the chance to humanize your hero. Your readers may not notice that you did it with purpose( how many of them can truly know all that the writer’s journey implies ?), but they will be inwardly grateful for the work you have done.

Begin with a Call and Refusal

Finding a strong Call to Adventure will hopefully be an easy thing to do. It’s a merriment instant to write, exploding with exhilaration, conflict, and gripping tension that sets your story’s core value center stage.

But don’t forget about the equally important Refusal of the Call. Make sure your hero says “No,” ” I don’t know ,” or” I emphatically know ,” and then fails miserably in order to better to learn a difficult lesson.

It’s instants like these that explain the Hero’s Journey’s enduring nature. We long for narratives that are honest.

Yes, we adore heroes and want to be like them. But more than anything, we want them to be like us.

“We adore heroes and want to be like them. But more than anything, we want them to be like us.Tweet thisTweet

And that’s what the Inciting Incident — the Call to Adventure and the Refusal of the Call — are all about.

Can you think of the Call to Adventure and Refusal of the Call in stories you adoration? Tell us about them in specific comments.

In the last installment of this serial, you developed your supporter and gave them in their Ordinary World. Now, it’s time to disrupt that and call them to adventure.

Start by drawing up the Call to Adventure, the moment when your hero is called to some action( Step# 2 ). Make it clear whether existing conflicts is coming from within( inside the hero’s Ordinary World) or without.

Then, establish the character fail somehow( Step# 3 ). Does he completely reject the call? Accept it with qualifications? Or believe he is ready, only to screw up somehow?

Take fifteen minutes to write, then share your scene in specific comments below. Then find three other novelists’ comments and leave some feedback!